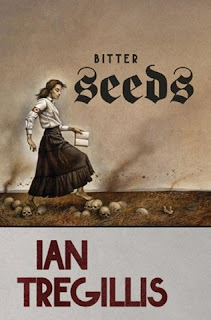 Bitter Seeds is Ian Tregillis’ first novel, though a reader would never guess that. It is a dark, troubling, ambitious alternate history retelling of World War II. As alternate histories go, this era is perhaps more commonplace than any other. It is the fulcrum of modern history, and as such gets appropriate attention. And those greedy Germans make for perfect villains.

To his credit, Tregillis finds a way to stake an original claim on this period of history. His Germans a suitably villainous, though not the complete foil that so often appear. The English come off as at least as shifty and dislikable, since they are willing to do just about anything – pay any price – to avoid being taken by the Germans.

In this WWII, the Germans have scientifically-engineered a limited number of individuals with incredible talents – one individual is able to create (and clothe himself) in fire. A second can make himself essentially a ghost for limited periods of time with the ability to walk through walls and allow bullets to pass through him. The process by which this set of characters is created is left shadowy throughout, though we are led to know that the procedure is incredibly cruel.

By contrast, the English have discovered a way to fend off the almost-unstoppable German surge. Magic. A small subgroup of Englishmen has the ability to negotiate with a race of cosmic godlike creatures. This sounds strange, but it works within the construct of the story.

The story’s villain – one thinks, though we’re never entirely certain – is Gretel, one of the re-engineered Germans whose “gift” or superpower is an ability to see the future. She is an enigmatic character whose motives are always in doubt, and whose foreknowledge plays an intricate role in the unfolding of the plot. She is also an apparent sociopath with little or no concern for other lives, and often a blatant disregard for them.

The protagonists are two Brits; Raybould Marsh, a secret agent, and William Beauclerk, a friend of Marsh and a noble schooled in the secret arts of a warlock. When Marsh discovers the Germans’ secret weapons, he turns to his old friend as a way to counter the threat.

The British magic is, in its way, reminiscent of the magic in Susannah Clarke’s Jonathan Strange & Mr. Norrell, though I don’t think it this novel ever achieves either the believability or potency of Clarke’s alternate England. Tregillis’ magic exacts a terrifying cost, though the ground rules for its use and the reasons for that cost are not well explained.

Marsh and Beauclerk, as protagonists, I found rather lacking. They certainly change throughout the novel – as anyone who endures their suffering would – but at no point do they truly strike me as human characters. Perhaps it is because the reader does so much skipping around through the various characters’ heads, but their transformation and decision-making rationale throughout the novel never seems fluid or well-defined.

Marsh, as the primary protagonist, should be understandable. Accessible to the reader. And somehow he never is. His grief, his regret, his pain. They are implied, but seldom felt. Beauclerk, at least, translates as a troubled and pain-ridden character, haunted by the things he’s done. Even by the novel’s end, Marsh is still an alien subject for me, and I’m left with only a vague distaste and repulsion.

That is the novel’s primary weakness.

Some aspects of the real WWII are notably missing, though whether this is through omission or Tregillis' alternative vision is unclear. Though we are constrained by viewpoints, the Final Solution to the Jewish Question – the pogroms and concentration camps and cattle-trains full of Jews – is scarcely mentioned. The Russian front – and how the Red Army succeeds against the invading Reich – is left hazy. Some answers are given, but they remain unsatisfactory. It remains to be seen why, if the war in the east was going so poorly, the Nazis did not employ their team of superhuman soldiers on that front. It seems likely that the Reich would use every weapon at its disposal to turn the tide of a war that had begun to go against them.

These are legitimate problems with the novel. Its strengths, however, are many. The prose is fluid and clear, at times excellent. The settings are vividly drawn and believable. Tregillis has done his research, and that gives this fantastic premise the ring of believability.

We are tragically drawn into the pain and loss of the war and the gut-wrenching decisions involved. Given a decision between two evils, what choice do you make? What price is too much? We are drawn back to Churchill’s dictum: Never, never, never, never give up. Sounds like great advice, in hindsight. What does that mean, when we examine it in more detail? When we put a human face, a human cost, on the balance?

This novel raises that question, but we are left to draw our own conclusions. As the first novel in a trio, perhaps the author’s stance will become clearer in later books. We are left instead with a pessimistic vacuum at the end of this novel, an unsettling ending that leaves an acrid flavor in the mouth, as the novel’s title suggests. There is very little human joy, little thought of redemption remaining. Only an echo of Babies. Monsters. caroming through my brain.

All the same, this is a novel worth reading. I’m afraid I haven’t done a suitable job of selling that conclusion, but it is the truth. I am interested in knowing where the next two novels are going, and I will be hitching along for the ride.