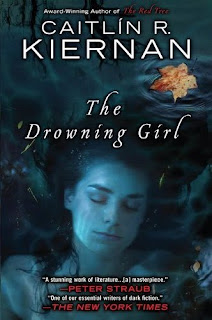 I find that few writers do slipstream well, especially at novel length. Murakami. John Crowley. Neil Gaiman. Stephen King. Jonathan Carroll. It’s a difficult, subtle tightline to walk, mixing the fantastic with the everyday, making the reader believe. More often than not, I find myself disappointed.

Add Caitlín R. Kiernan to the group listed above. The Drowning Girl is fantastic – a gorgeous, fractured tapestry of a novel.

But I’m getting ahead of myself.

If you think this sounds like a grim opening to a novel, it is, but much less so than you might think. Imp’s charisma, her sharply-drawn personality, shine through on nearly every page. Imp narrates her story through flashbacks, journal entries, analogies. These snarl into a tangle of contradictions, odd coincidences, and broken timelines that Imp can’t quite reconcile.

She knows, rationally, they can’t all be true. But she believes in them – in each of them – wholeheartedly. To quote the Radiohead song - "There There" - that Ms. Kiernan cites as an inspiration: Just cos you feel it doesn’t mean it’s there.

Imp has obsessions. Hauntings, she calls them.

One is a painting she sees at a local exhibit when she’s eleven. It’s called The Drowning Girl by Phillip George Saltonstall, and features a girl walking into a river or pool, and peering back over her shoulder at a dark, eerily dark, patch of wood. It isn’t just the painting, of course, that obsesses her. The reader comes to understand that Imp has a long-standing obsession with mermaids and fairy-tales, and that The Drowning Girl merely crystallizes that obsession, becomes a focal point.

The second is another painting, seen years later at another exhibition. It is called Fecunda ratis, and features a blurred Impressionistic rendering of a young girl in a red tunic, “surrounded by a circle of dark, hulking forms – the wolves – and the wolves, in turn, are sitting within an outer circle of standing stones, a looming megalithic ring.” This, of course, represents a form of “Little Red Riding Hood”, a fairy tale Imp calls her “least favorite”.

The two paintings, and the two fairy-tales, become the nexus around which the story revolves. Nightmare and dream. The two tales wrestle over Imp’s mind, ply each other for dominance. They become her stories.

A dark country road in Eastern Connecticut. Another dark road beside a river in Massachusetts. A woman who called herself Eva Canning, who might have been a ghost, or a wolf, or maybe a mermaid, or possibly, most likely, nothing that will ever have a name.

The narrative moves backwards and forwards in time as Imp tries to reconstruct her thoughts and find the truth of her story. She realizes that fact and truth are not synonymous. Imp says in the opening chapter that she will try to tell the story as she remembers it. “Which is not to say every word will be factual. Only that every word will be true. Or as true as I can manage.”

The story comes in broken chunks and flashbacks interspersed with her current life and in little pieces of fiction that she has written.

The story is strewn with references to everyone from Charles Perrault to Dante Alighieri. Kiernan peppers the story with odd facts (Imp collects odd facts like shells on the beach), and even fictional references like the painting of “The Drowning Girl” felt real enough that I needed to search to ensure it didn’t really exist. This gives the novel a feel of authenticity, a believability that never, even in its strangest moments, dissipates.

Capturing the skittering thoughts and images of Imp’s mind must have been a daunting task, but Kiernan’s style brings it off beautifully. It varies between extremely lucid and straightforward or surrealistic and dreamlike, dependent upon Imp’s state of mind. It is most powerful in its surrealistic state, especially Chapter 7, which centers around that number and reads like a strange opium dream.

This is my ghost story of the wolf who cried girl. The murdered wolf ghost who roamed centuries after a musket blast, without other wolves, except other wolf ghosts, for company. And somehow she forgot she ever was a wolf, deprived of others of her kind to provide perspective. She forgot.

The story doesn’t tie up neatly into a little bow. It remains fractured, just as its narrator remains fractured. Imp can control her illness through medication. But there’s no cure, just as you sense there’s no easy solution to her story. What happened, on a factual basis, is far less important that what is true. Imp realizes this central tenet to storytelling. It is why fiction is so much more important than non-fiction. There are truths contained therein that will never be found in a dry collection of facts.

I’m reminded of the lines from Yann Martel’s brilliant Life of Pi:

The Drowning Girl is certainly a better story with the animals. And it’s one of the finer books I’ve read this year.